There is no automatic acceptance for Haitian asylum-seekers coming to Canada from the USA
By Stephen Fogarty • August 23, 2017 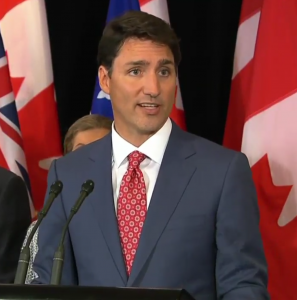 On January 28, 2017, only a few days after the inauguration of President Donald J. Trump, our Prime Minister, Justin Trudeau, issued this Tweet: “To those fleeing persecution, terror & war, Canadians will welcome you, regardless of your faith. Diversity is our strength #WelcomeToCanada”.

This Tweet, coupled with lack of knowledge about Canadian laws, wishful thinking, and desperation by some, has led to the false belief across the Internet that Canadian immigration rules have been flung aside in favour of an open-door policy. The situation has progressed during 2017 to the point that, during July and the first three weeks of August, almost 8,000 persons have crossed over our borders from the United States seeking asylum.

The vast majority of this influx of persons from the US are of Haitian origin. Many were living in America with special permission since the 2010 earthquake in Haiti, and now fear their status may be canceled by Mr. Trump in the coming months. Among those who have come here are many families with US-born children. There have also been reports that some of the recent arrivals are Haitians who headed straight to Canada after arriving this summer in the ‘States on tourist visas.

Despite Mr. Trudeau’s warm words quoted above, persons considering relocating to Canada must understand that there is no such thing as an automatic acceptance for permanent residency, whether under the regular Canadian immigration streams, or as asylum seekers.

Asylum-seekers need proper information. Legal rules cannot be set out fully in 140 characters in a Tweet. As stated much more completely on the official webpage of our Immigration and Refugee Board, there are strict criteria to be granted protection by Canada.

“You can be given refugee protection in Canada if you meet the United Nations (UN) definition of a Convention refugee, or if you are a person in need of protection. The UN defines Convention refugees as people who have a well-founded fear of persecution because of their race, religion, nationality, political opinion or membership in a particular social group. Membership in a particular social group can include, but is not limited to, sexual orientation, gender identity, domestic violence and HIV status. Persons in need of protection must show that if they return to their home country, they will face a danger of torture, a risk to their life or a risk of cruel and unusual treatment or punishment.”

As PM Trudeau stated during a press conference held in Montreal on August 23, 2017, the Canadian government intends to ensure that the integrity of Canada’s refugee system is maintained, and that all required formalities are rigorously followed.

What does this mean? The fact a person may face economic hardships, or difficult social circumstances, in their country of origin, does not make them a refugee under Canadian law. In addition, persons whose claims for protection are refused normally will be required to return to their country, even if the process takes several years.

Statistics have shown an acceptance rate of about 50% for refugee claimants from Haiti. Keep in mind, however, that this overall acceptance rate was for cases where the claimants argued they could face a possible risk of persecution or of risk to their life or safety, not just fear of unemployment and similar concerns. It is likely that the rejection rate will climb well over 50% in the months ahead once the current influx of claimants coming out of the USA is factored into the statistics.

Before taking on such an uncertain future and coming to Canada, which may result in the exact same circumstance they fear, being returned to Haiti, asylum-seekers should at least first inform themselves fully about possible options available to them in the United States, which may possibly offer a better and safer alternative for their own family situation. It will be saddening to see thousands of persons obliged to leave Canada and returned to Haiti after undergoing a refugee claim process they had little hope of winning.